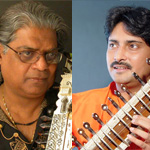 A unique jugalbandhi of Sarangi & Sitar and a rare treat for lovers of Indian classical music. Pt Ramesh Misra is a Grammy award nominee and a legend in the world of Indian music. Sri Indrajit Bannerjee, known for his lyrical style and versatility is one of the finest exponents of the Maihar gharana. They will be accompanied by Gourisankar […]

Sounds of India – an evening of traditional Indian music January 25th, 2014 Yoga Yoga 360 with Indrajit Banerjee  and special guest, Gourisankar An evening not to be missed! Join award winning Sitarist Indrajit Banerjee joined by tabla master Gourisankar for an evening concert at the picturesque Yoga Yoga 360 studio. Both of these world class musicians are critically acclaimed […]