History and Origins of the Sitar 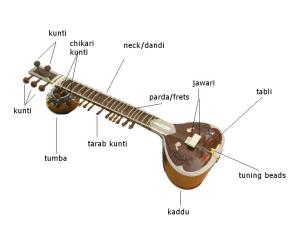 History and Origins of the Sitar

In the western world the sitar is perhaps the most well known musical instrument of India. It’s sound evokes thoughts and feelings of the sub-continent. It is believed to have evolved into its present form in the 1700’s, during the collapse of the Moghul Empire, as a marriage between the Persian Setar and the South-Indian Vina, while using the characteristically resonant bridge of the Tampura.

There is a common story attributing the invention of the sitar to Amir Khusru. Amir Khusru was a great personality and is an icon for the early development of Hindustani Sangeet (North Indian classical music). He lived around 1300 AD. As common as this story is, it has no basis in historical fact. The sitar was clearly nonexistent until the time of the collapse of the Moghul Empire.

Another theory has the sitar evolving from the ancient veenas such as the rudra vina. However the rudra vina is a stick zither while the sitar is a lute, and there are differences in materials used. It is not very likely that the sitar owes its origins to this instrument.

Some suggest that the sitar is derived from the Saraswat ior Khachappi vina. This is at least a possibility. Still there are questions raised. There is a possibility that the lute class of chordophones is not indigenous to India but was imported from outside. But the use of Gourd for sound box the metal oval frets and also the temple carvings strongly suggests that it is an adaptation of some kind of veena with some present day modification.

It is clear that the sitar as we see it today developed in at the end of the Moghul era.. The “Sangeet Sudarshana” states that the sitar was invented in the 18th century by a fakir named Amir Khusru. This of course was a different Amir Khusru from the one who lived in 1300. This latter Amir Khusru was the 15th descendent of Naubat Khan, the son-in-law of Tansen. It is said that he developed this instrument from the Persian Sehtar.

Amrit Sen and Rahim Sen are credited with modifying the tuning and stringing of the Sitar and introducing numerous new techniques to the instrument. .

Whatever its true history, the sitar has continued to evolve over the centuries and is still evolving.. Presently, there is 3 forms of sitar The the Kharaj pancham ( sitar in General with,7 stringes with 2 bass strings) the Ghandhar pancham( 6 stringed no bass strings.).and the Ravi Shankar style(Kharaj pancham with, with 6 strings)The Kharaj Pancham sitar Played and popularised by Ravi Shankar, has 4 octaves and 6 primary playing strings and 2 bass strings..The Gandhar pancham sitar modified and popularised by Vilayat Khan  has 3 octaves and no bass strings In addition to the top playing strings threr are 12 to 13 Tarafs  (resonating strings ) underneath the top 7main strings. When a note is struck on the fret these Tarafs ring with the same frequency to create a natural reverb inbuilt in the instrument.

The Sitar’s neck and face are made of Indian mahogany and its round back/base is of a dried pumpkin. Although the Sitar has a minimum of eighteen strings, it generally has just one main playing string. The remaining strings provide it’s ethereal resonance and/or resonance plus rhythmic accompaniment. The Sitar has two separate bridges, one upper, and one lower. The upper contains the playing string(s) and the chickary strings (used for rhythmic and drone accompaniment). The lower bridge usually has about twelve tarif (sympathetic) strings, which are very fine and are tuned to the notes of the Raga (scale) being played. These strings, when tuned accurately, will resonate without being touched when a corresponding note is played on the upper main string, thus giving the sitar a natural reverb effect. This effect is enhanced by the structure of the bridge. Copied from the ancient tampura (a background drone instrument used primarily to accompany vocal music) the Sitar’s bridge is made of soft deer-horn and is flat on top and is shaped in such a way as to allow the strings to gently buzz against the flat bridge surface. This effect is called jawari.

The Sitar is a fretted instrument but the frets (metal bars) are tied on loosely enough to be slightly moved or tuned. The tuning of the frets is another feature that sets the sitar apart from western instruments. The Sitar is played in the natural or untempered tuning system. Many western instruments such as the guitar and the piano are designed to be played in the equal-tempered tuning system that is a modern invention without which the chordal harmony and 12 keys of western music would be impossible to achieve from a single instrument. The disadvantage of the tempered system is that it is microscopically out of tune. The Ancient, Natural, or untempered tuning system retains the perfect or natural tuning of each interval. It is believed that music played in the Natural tuning system has a profoundly harmonizing effect on listeners.

The most striking feature of the Sitar’s playing technique is it’s main strings capacity for being pulled or bent. On one fret the main string can be pulled downward at least a fourth; for example from C to G. This particular feature has only been available during the last fifty years – since steel strings have been made with enough strength to withstand such tension. This pulling capacity allows the instrument to accurately emulate the gliding effect of vocal music.