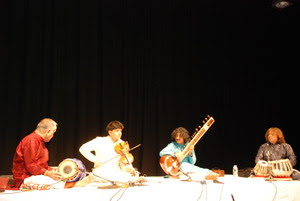 Some concerts entertain, and some others engulf you in their midst, overpowering you so forcefully it is sometimes tough to tell audience from artist and listening from experiencing. The Scintillating Strings recital fell in the latter category. It wasn’t simply a concert. For this listener, it was the stuff of pure fantasy. The best analogy is probably the experience of reading a Harry Potter book – defying imagination and keeping the reader or listener hoping it will never end.
There were exactly four items, if one were to call them that. Madhuvanthi/Dharmavathy, Audava ragamalika, Charukesi and Sindhubhairavi. There seems to be a marked affinity towards presenting Dharmavathy and Madhuvanti in Hindustani/Carnatic jugalbandhi concerts. The predictability ended there, however. As Ganesh’s Dharmavathy opened, one felt like being wafted through a myriad of delightful secret passages, with the excitement of anticipation at turning corners fulfilled here by a well-trodden phrase, and there by a totally unexpected jump. Indrajit Bannerjee’s essay of Madhuvanthi seemed more reposeful in comparison, with speed and impulse giving way to telling tugs as is the wont in the North Indian idiom. It was the most delightful contrast. The idea of a one-liner piece was a master stroke. It has the advantage of giving a purely instrumental ensemble a wide space to play around in. Dharmavathy morphed into Valaji with one hardly noticing the breather in between. All the while one could not but notice the shackle-free engagement amongst the artistes. They were enjoying this as much as everyone else. There was no need to communicate anywhere…one took up where the other left off and it didn’t matter  whether it was string or percussion.  As Valaji gave way to Abhogi, Mohanam and Brindavana Saranga, the speed factor seemed a little overwhelming at times, if only because it was getting increasingly challenging to keep time. Time for intermission, folks. As if he had heard, Ganesh announced a break. A break from breakneck speed. A break for a Charukesi that would break the resolve of the stoutest of heart to not give way to emotion. What a Charukesi it was! And the “experiment” that was announced of juxtaposing the thani avarthanam between the alap(ana) and the song didn’t seem like one. With ecstasy, there is no order or timing. It flows and we lap it up. Ganesh’s ADamODi galadE, punctuated by Mazumdar’s tabla, and the one and only Trichy Sankaran accentuating the sitar’s pleading phrases with electrifying – there is no other word for it- phrases. If a reader can imagine being all at once transfixed, melted, galvanized, teased and cherished, this concert did it all. It is probably going to replay several times in many hearts. Frozen in time. But unlike in Frozen, we can’t let it go. Thank you, Ganesh, Sankaran, Banerjee and Mazumdar sirs.